The De La Warr Pavilion's new exhibition of video art began today. Good turnout, opening speeches by director of DLWP Alan Haydon (on right in picture) and the director of The National Portrait Gallery Sandy Nairne, who declared the show "of national importance". And he's right, there's not been anything before that can be directly compared to it. 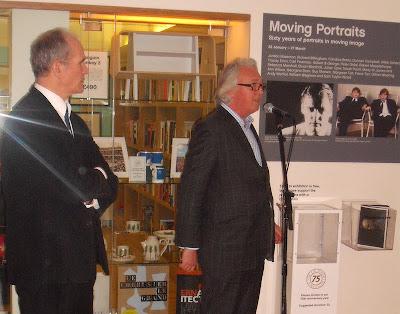 My task, as part of this years interpretation team, was to enhance visitors' experience of the exhibition. I decided to do this by asking willing visitors to design a five second moving portrait as a way of thinking about possible decisions behind the work on show.

They did this by filling in a short form (point of view, what happens, stickman sketch of composition etc). We then filmed it on one of the Pavilion's little digital compacts, usually in one take, later simply presented in the order in which they were made. Thanks to all who are now famous for 5 more seconds and Penny Hobson who assisted and recruited.