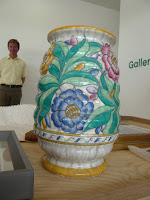 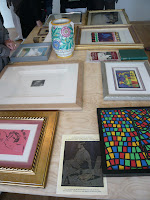 Edward Twohig brought along some of his collection of prints by artists Marc Chagall, Joan Miro, Samual Palmer and Patrick Caulfield for today’s Collectors Corner. Although these were lovely pieces of work his real passion is the work of Charlotte Rhead (1885 -1947) a ceramic designer from Stoke on Trent. Rhead worked at the time of Susie Cooper and Clarice Cliff but her work was more traditional in style and she used a range of decorative motifs influenced by patterns commonly used in India, China and southern Europe.


Edward recounted how each piece in his collection was the result of detailed research, planning, anticipation, and the excitement of travelling far and wide and bidding in auctions. On his many travels Edward has met other enthusiasts and fans of Rhead and has struck up friendships with those of similar passions in the UK and around the world including in America and Uruguay. On the wall he stuck up pictures of his collection of Rhead’s work – at his home every wall space is covered with plates and platters of all sizes and colours, tables and floors shimmer with a riot of brightly glazed jugs, vases, bowls and tiles. His passion is palpable and the audience were entranced by the many stories behind his acquisitions, acquaintances and accidents.

Our other collector was Tom Estes who arrived after prolonged and fraught journey from London with a suitcase of newspaper cuttings – hundreds of articles and photographs of stories that had caught is eye, or made him laugh over the years. Two women were caught up in articles about Spencer Tracey and Katherine Hepburn and they spent some time discussing the vagaries of Movie Stars and the truths told about them.
Posted by agentesse at 07:34