75th Birthday Party - Thanks to everyone who came! 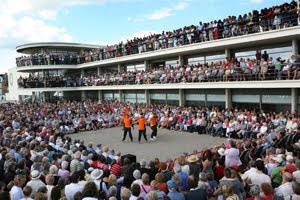 On August Bank Holiday Monday, the De La Warr Pavilion celebrated its 75th Birthday with a huge party on the terrace, its focal point being the re-creation of a famous photograph first printed in the Daily Mirror in 1936.
In the Bank Holiday sunshine over 1500 people gathered on the terrace in front of photographer Sheila Burnett who was lifted 5metres on a Genie lift to be in exactly the same angle and position as the Daily Mirror photographer must have been 74 years ago. The Daily Mirror Eight, the dance troupe in the middle of the terrace, were replaced by parkour/free-running outfit The Urban Shadows, who put on a spectacular show for a cheering crowd before staging the actual shot.

At 10am that morning, 120 people from the local community – none of whom had met before – put together a “scratch” choir and “scratch” orchestra, led by choir leader John Langridge and composer/musician Mike Hatchard. The choir sang a Summertime, Sway and Abba’s Mamma Mia. The orchestra played Spread a Little Happiness and a Beatles medley, as well as a new piece – Seventy Five Years of the De La Warr – composed by Mike Hatchard to celebrate the day. Julian Humphries led a group of young drummers who warmed up the crowd for the afternoon.
After the performance everyone sang happy birthday!
Free Tea and cake were then served to everyone outside the auditorium, courtesy Yorkshire Tea and Jubilee Hire.
And then the dancing started…. seventy-five tunes for seventy-five years kept us dancing until sunset with an playlist of classics and re-discovered hits put together by DJ Nikki Beatnik.
This fantastic party came at the end of an enormously successful weekend for the Pavilion which saw 10,000 people visit Tomoko Takahashi’s exhibition and Antony Gormley’s installation in just three days, with over 600 attending our family films, shown outdoors on the sea-facing wall, on Saturday and Sunday.
Please post any pics you have and visit our website to see forthcoming events at the Pavilion!
Photo by Sheila Burnett.
Posted by dlwp at 03:46