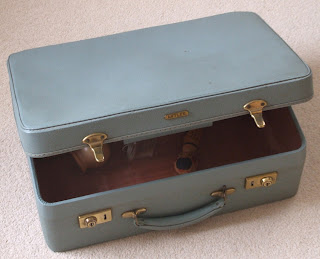 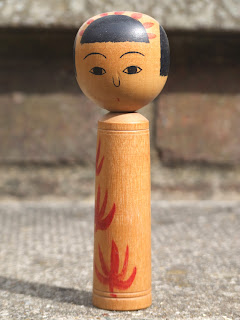 A small, green 1960s Antler suitcase lined with pink, watered satin bought from a Charity Shop for £1. Inside, a variety of mystery objects. Reach your hand in and pick one. Don’t think too much about which to pick, just take the first one your hand encounters. Take it out carefully so that no one else can see it and then look at it yourself, all the while keeping it hidden from others.

Next describe the object trying not to say what its function is (if it has one). What is it like? What shape is it? What colour? When someone guesses correctly place the object in the middle of the table until we have a collection.

Part 2 Relating to objects and to each other

Now, give your object to someone else who in turn gives theirs to another. Study your new object and think about something in your life it relates to. Then tell your story.

Place your story-object on the small, strange, two-tier metal trolley-on-a-lead that happens to be in the corner of the room. Everyone places their object until we have a mini-installation. We look at it, we discuss it. Look how the grain in the wood of the paintbrush handle echoes that of the lines on the curtain-rail finial. ‘Finial’? A word for the decorative end of a pole or banister for example. A new word I’d not heard before springing up from someone in the group.

I could list the objects but to do so would not do them justice and it would spoil the games in case you are thinking of coming along to take part yourself.

But there is one I can name: a small, wooden Japanese Kokeshi doll. Next Sunday I will be bringing along more of my collection of Kokeshi and describing some of my mixed feelings about these strange and beautiful objects: Collectors’ Corner 2.30pm Sunday 8th August.

Thanks to all those who took part last Saturday, it was all fun and enlightening.