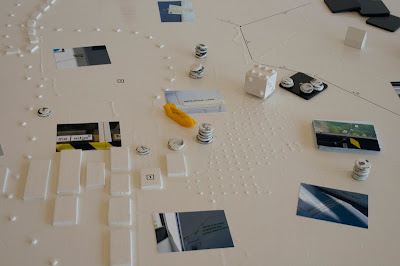 My game set up by Eva. 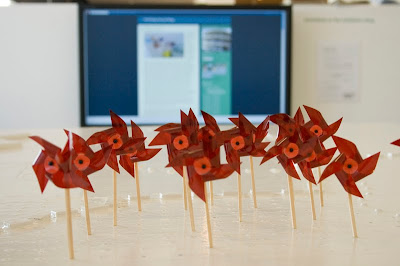 I took a piece of my own work to the gallery on Sunday. It's a sort of game which first began in 2005 when I was exploring ideas about mapping and wayfinding. It started with the board. I was thinking about how blind people find their way around familiar places. I had been talking to blind friends about their strategies of counting paces; listening for changes in sounds; feeling changes in the air temperature, wind strength, the ground beneath their feet; all those things which sighted people don't think about most of the time. I used some tactile maps as references to mark out a trail on a big piece of board. That was the start of my game. I've added to it over the years and each time I set it up it's different. This week I brought it to the gallery to let other people decide how it should be set up.

Talking about how she decides on the way her installations will develop, Tomoko Takahashi has said that there is always a kind of story behind it - she sets up a background and starts imagining things. That was exactly what a little girl called Eva did with my game. Hers was a story of goodies and baddies and a great flood which the goodies had to escape from in boats which sailed across my board leaving a trail of markers for  people following on behind. Then they made a blockade to keep the baddies out of their area and set up (slightly wonky) red windmills to generate their electricity.
Posted by Judith Alder at 13:47