Flying through the stars by Madeleine 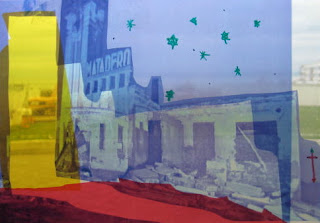 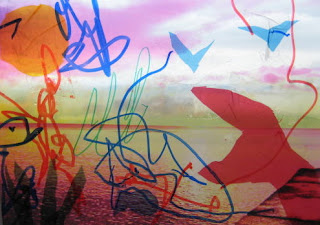 Red crab at large by Rhiannon

A wealth of dreams intertwined and came to 'technicolourful' life in this second interaction exploring the connection of creating personal dreams with the landscapes and surreal images of Catherine Yass. A steady flow of contributors from small children to adults, invoked strange, distorted realities which form unconscious journeys of dreaming.

The first to take part was Olivia, accompanied by her mother Kate, and aunt Ann, revealed the lovely fact that they are a 'dream sharing family', often discussing the content and meaning of their dreams. We all agreed that we were great fans of the Platypus, (see below) largely because it seems to be assembled like a living animal collage. 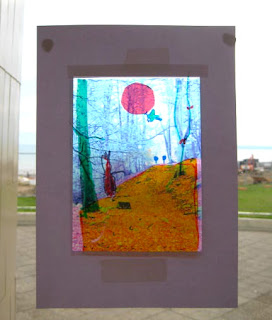 Listening to the key details of the wide range of conscious dreams which unrolled throughout the afternoon, I decided take a little artistic licence to use the way in which the individual art works were collaged together to create one magnificent and dramatic dream of rescue, thull-duggery with a happy ending.... 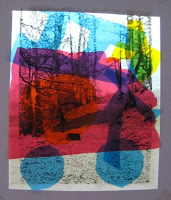 Under a big red sun in a tunnel of trees, a platypus flies past over tropical trees and looks down on a fire engine driving fast through the trees to the rescue of a naughty woman stuck in a tree, narrowly avoiding a car driving fast, which is about to knock down those trees...The sun becomes yellow as it lights up the beach at Bexhill, the sky fills with birds and a big red crab running through seaweed. A rocket waits at some steps for a lady and her dog, who was lost, but rescued and returned by a ladybird and two bees.

The rocket will take them to see if any birds need rescuing. They may be lucky enough to see Madeleine (top left) by on a little ship, being shown around the stars. The sun turns red as it sets in the forest, where a monster tries to take some gold but is beaten by a knight who gets there first...... 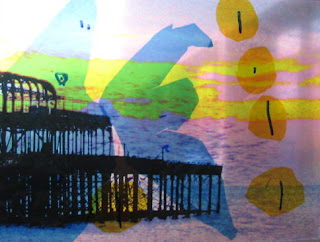 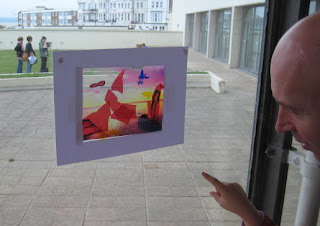 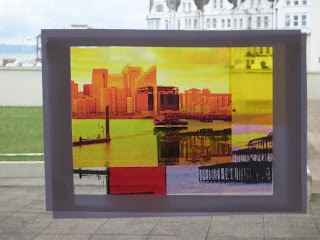 The last two people to leave were Sarah, a scientist from Stoke Newington and Vanessa an artist based in Finsbury Park, who had both very much engaged with the exhibition. A meandering exchange which ranged from taking almost identical shots of Brighton beach, to the way in which a reflection in water can appear like an entrance to another world, integrated itself into each artwork as can be seen above and below.

Their responses concluded the strange and imaginative spaces which were conjured into new surreal realities in dialogue with the exhibition by each thoughtful and generous participant: Joe and brother Sam, Rhiannon and her companions uncle Wayne and auntie Becky, Maya, Olivia, Madeleine, Megan, Yasmin, Kasia, and several families who worked so fast that there was no time to catch their names. A big thank you to Calum and Anne for their sensitive support. 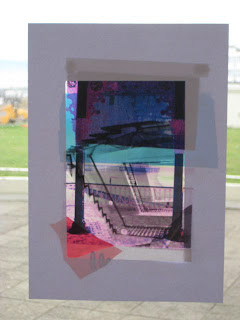 Vanessa's inside out reversed seascape

Bees and ladybirds to the rescue by Yasmin 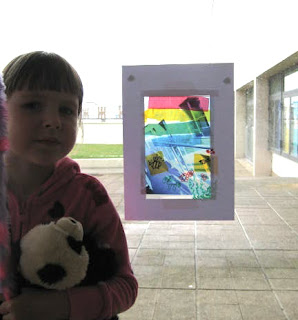