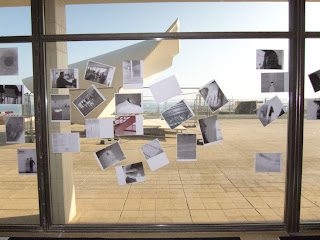 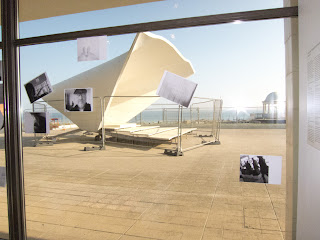 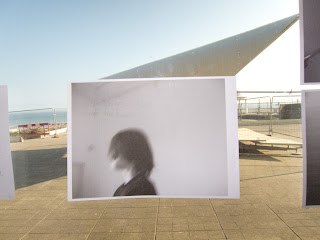 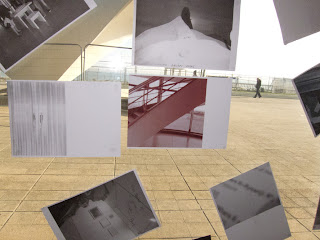 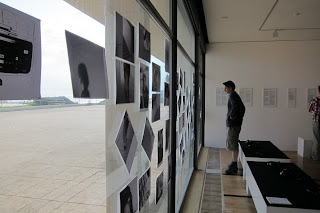 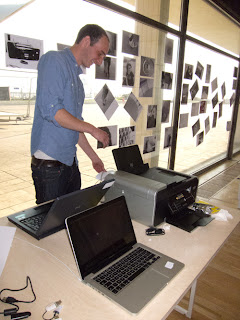 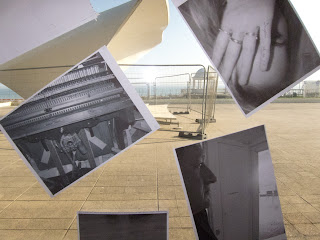 This was the first interaction in the gallery for the John Cage season and we were lucky enough to have beautiful weather, a packed gallery and a designated space for the interaction session. The area  - in which you could also watch videos on John Cage - proved to be invaluable and along with my two wonderful volunteers, Josef Konczak and Will Richards we created a real hub of creativity, inventiveness and discussion.  Those that interacted were asked to  take photographs of parts of their own bodies or something close to them, randomly pressing the shutter at a time when an utterance was heard within the gallery space, that stood out above all others.  The photographs were meant to be immediate and taken without traditional aesthetic framing. The images were then converted into black and white files and printed. The utterance or sound was then added to the image with pencil.
The idea was to produce images inspired by Cage’s idea of chance and forced artistic limitations.  Specifically inspired by Seven Day Diary (Not Knowing), 1978, the artworks produced reflected a particular time and place, the juxtaposition between text and imagery engaging with the relationship between the self and chance encounters. For the duration of the Saturday interaction the prints were shown on the windows of the workroom.
The exercise instigated much dialogue about how easy it was to follow a specific brief and relinquish the desire for creative autonomy.  Many found this challenging and liberating when they achieved a work of art created entirely by chance.  Those with a more prescriptive notion of producing artworks had two or three attempts before producing something that appeared to be just chance encounters.  Some discussions developed into philosophical ideas of  'autonomy' in art and whether it was still 'you' producing the artwork as they seemed so determined by chance. Each print produced was unique and represented personal artistic integrity, despite being produced from an outside brief.  Interesting dialogues were instigated about the 'value' of the art object in relation to the amount of 'work' put in to the final piece.  I shall be doing the exercise again on the 7th May and will be very much looking forward to the afternoon.
Posted by Lisa Barnard at 04:50