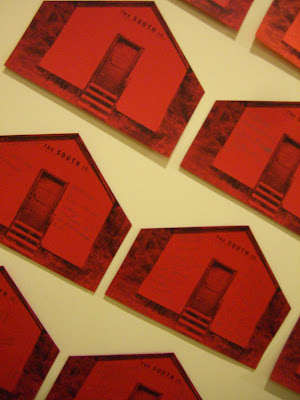 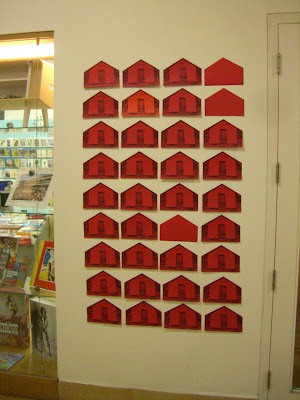 A snow-bound pavilion, with beautiful ghostly views across the snow-topped rotundas to a thick, hanging seascape. Not a day to attract crowds of gallery-goers, except for cold weather enthusiasts (myself included). However, we welcomed over 50 visitors into the exhibition during the afternoon.

My question to the exhibition was: “What is the South?” – how does this pejorative concept emerge from the work on show? Does a “South” exist in all countries? Is it a myth in itself? I designed my interaction around William Christenberry’s “Red Building”, which I turned into a comment card, looking for definitions. Here are some of the diverse thoughts:

The South is…”a reminder that American culture isn’t as comfortably, tediously uniform as some might have you believe.”

The South is…”being able to walk freely across the beaches and the countryside, through the towns and cities – whoever you are…”

The South is…”in search of amusement…”

The South is…”not the North. Bruised, beat-up and abandoned – “this land is condemned at the way from New Orleans to Jerusalem” (Dylan).”

Three of the most interesting conversations I had during the afternoon were with visitors who are either American or who have lived in the United States for a while. They all separately expressed the view that the sense of hopelessness and melancholia they read from the photographs are only one facet of the “South”, and that the exhibition (although they all liked it very much) reinforces the myths we tend to believe about the place. While other powerful elements, such as the dynamism of the cities and the genteel elegance of the manner of the people (in all walks of life) are invisible.

As with the other days when I have been interacting in the gallery, there were a number of visitors who were enthralled to see original prints by their photographic heroes. In particular, William Eggleston’s highly saturated surfaces are so rich it looks as if the colour could bleed on to the floor. This intensity is a vital component of his vision and cannot be replicated in books about the artist’s work.

Thank you to everyone who participated. It is always a pleasure to turn a gallery space into an environment where people can share impassioned views, rather than feeling they have to whisper.

Posted by Sheridan Quigley at 08:07